COTTAGE COUNTRY ENVIRONMENTAL SERVICES
working with you to find a solution

The OBC regulates construction, operation and maintenance of sewage systems with a Design Daily Sewage Flow under 10,000 litres per day.  It also regulates the qualification of inspectors, designers and installers.

In many municipalities in Ontario the inspection of sewage systems is now conducted by Municipal Building Inspectors.  Within the District of Muskoka each of the six area municipality building departments administer a sewage system program.  In Haliburton County, the inspection of sewage systems continues to be conducted by the Haliburton, Kawartha, Pineridge District Health Unit (Health Unit).  The Health Unit had previously conducted inspections through an agreement with the Ministry of the Environment.  Agreements have been made with the individual municipalities in Haliburton to have the Health Unit conduct septic system inspections and administer the related regulations of the Ontario Building Code.

During the 1970's, 1980's and 1990's, the Ministry of the Environment (M.O. E.) conducted sewage systems re-inspections around various lakes in Ontario including many lakes in Haliburton and Muskoka.  The program was called the Cottage Pollution Control Program.  The M.O.E. phased the program out in the early 1990's.  Since the jurisdiction of sewage systems has been transferred to the OBC, some municipalities have commenced doing re-inspection programs, which are similar to the previous Cottage Pollution Control Program.  Re-inspection requirements for sewage systems are currently being developed for inclusion in the Ontario Building Code.

Under the Ontario Building code there are five (5) classes of sewage systems .

only be used for the disposal of human body waste.  These systems must not receive

any grey-water or any other wastewater from plumbing fixtures such as kitchen sinks,

washing machines and bathtubs.  The Class I system does not require a permit; however,

it must be constructed and maintained according to the OBC. 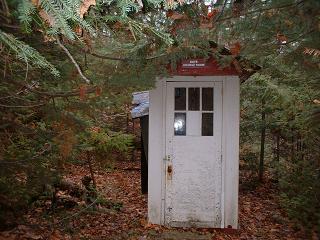